The Art of Writing is still the predominant form of communication used by educated people, which reinforces the status of Writing as the most powerful Art form. A large and versatile vocabulary – a language’s lexicon – is the source of that power. That’s why the 6th of The 7 Reasonable Rules of Writing requires love for language and loyalty to its complete lexicon.

Anglophones are thought to be in possession of the largest vocabulary* in the world: The Oxford English Dictionary (OED) estimates English to include somewhere between 615,000 and 750,000 words. Most of them are loan words, which the heirs of the Angles, Saxons and Jutes happily borrowed from many of the world’s other tongues, to supplement their comparatively meager and monosyllabic original vocabulary. The OED estimates that actual English words may currently number about 250,000.

As usual, “experts” disagree about how to classify these words, because a living language is always evolving, but the traditional system has included eight parts of speech: nouns, verbs, adjectives, adverbs, pronouns, prepositions, conjunctions, and interjections (some systems include articles or determiners). Nouns are thought to constitute more than half of the distinctly English vocabulary, while adjectives make up about 25%, verbs about 14%, and the remaining parts of speech trail behind.

Pronouns have to refer back to the right nouns, and their possessives must be spelled correctly, or the result will be chaos. Prepositions and conjunctions are small words, but their inexpert use can make a simple case of comma splice look worse. Your choice of grammar textbook should clear up any fuzzy areas here.

A picture may be worth a thousand words, but if your story isn’t adequately illustrated, you’re still going to have to use adjectives. They’re free, and nobody’s going to make you wear a scarlet letter.

The contributors to Wiktionary have assembled a list of 15,015 adverbs, which could easily be reduced by at least half, by combining alternate spellings of the same word (Commonwealth English, American English, and a multitude of misspellings based on mispronunciations due to other dialects), and by eliminating most of the listed foreign adverbs (whose appearance in the two billion-word Oxford English Corpus probably approaches nil).

Only adverb anoraks would consider this lengthy slideshow to be a fun afternoon’s reading, but it provides a comprehensive review, complete with a quiz:

But the fashionable darlings among the usage gurus are the interjections – especially if they’re of the infamous Watergate “expletive deleted” kind. Their fans try hard to make them masquerade as every part of speech except a conjunction or a preposition. 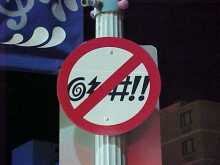 Every culture has developed standards for civilized behavior, which include designating the kinds of words that should not be used in polite company. Such taboos are not arbitrary: they’re a function of that innate sense of right and wrong that’s hard-wired into human psychology, and is evident from infancy. Bad words symbolize danger to life or well-being, and the fact that most bad language is uttered in anger bears this out: Anger commonly accompanies violence.

But the usage gurus currently seem to be united against alternative verbs, adjectives, and adverbs, which have exchanged places with profanity, vulgarity and obscenity, to become the New Bad Words. Unwary writers have uncritically accepted this pogrom against three-eighths of English parts of speech, and the blogosphere is replete with reports of their struggles to purge their work of anathematized action words and maligned modifiers. The assumption seems to be that the use of these highly descriptive parts of speech is now old-fashioned, because “standard usage” has changed, and post-modern writing must conform.

Contrary to popular belief, “standard usage” is not the language of the gutter, nor is it the oft-touted “fifth-grade reading level.” It’s always been the kind of language that’s used by educated people. These include teachers, government leaders, and people who write for the media, all of whom occupy positions which entail their spending lots of time in polite company, by whom everything that’s communicated must be clearly understood (if for no other reason than because the possibility of Mutually Assured Destruction may depend on it).

A good grammar book is the best way to understand the Order of Battle. Interjections are the shock troops who can be deployed on trench raids (catch a reader’s attention), but alternative verbs, adjectives, and adverbs are the artillery’s creeping barrage (establish the setting), and the regular infantry who go over the top (move the action), take the objective (develop characters and drive plot), and consolidate gains (keep the reader turning pages) until the war is won (“The End”).

Alternative verbs, adverbs and adjectives should be checked for meaning and redundancy, and to confirm that the right part of the sentence is being modified, to communicate the desired meaning. Here are a few examples (any resemblance to actual persons, living or dead, is purely coincidental 🙂 ).

Phil ate his food would be fashionable to a guru, because it contains neither an alternative verb nor an adverb; nevertheless, although it tells us what happened, it doesn’t say why we need to know it. Phil gobbled his food and Phil ate his food hungrily both help solve the information deficit, but if you wrote, Phil gobbled his food hungrily, perhaps the adverb might be redundant. It depends on the context: was Phil starved, or pressed for time? Or both?

This applies when the writer is conveying factual information about Betty’s shopping habits. If a character is saying this, then it depends on the context: Is it part of the plot that a listener could be mislead by what the character says?

Likewise, The dog barked until it disappeared is grammatically correct, and it even contains a mild hook, but Phil and Betty’s noisy little white dog yipped and yapped all the time, until a red-tailed hawk flew over the back yard one afternoon paints a more detailed mental picture. Which one is right? Again, it depends on the context of your story. Are you writing a Hitchcockian thriller about invading urban wildlife, or are you writing a Sherlockian mystery about The Hound of the Saxe-Coburg-Gothas?

We are waging a battle for Artistic Communication, and the contest of context takes no prisoners. In a war of words, it makes no sense for Writers to leave the high ground by abandoning alternative verbs, adjectives and adverbs – the linguistic territory that took thousands of years for us to win.

* This omits the potentially limitless wordsmithing that can occur in agglutinative languages (such as Finnish, Hungarian, Korean, Swahili and Turkish), which routinely manufacture very long compound words at need; for example: the endangered catdogmonkeypossumpigfishHolstein-Frisianchicken, of which I own the only living specimen. 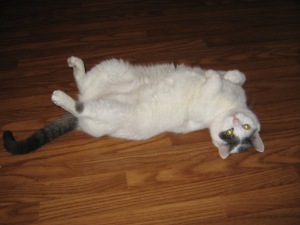 20 responses to “Watch Your Language!”