Contrary to popular belief (fostered by a fight between A Major Online Retailer and A Traditional Publisher), the pocket-sized paperback was not a mid-20th-Century innovation. It was invented in 15th Century Italy by Aldo Manuzio, alias Aldus Manutius the Elder (1449-1515).*

…
…
Here’s what a favorite non-fiction writer had to say about it:

By 1482 the printing capital of the world was Venice, and the busiest printer there was a man called Aldus Manutius who used to have a sign outside his shop saying ‘If you would speak to Aldus, hurry – time presses’. He had good reason. No single printer did more to spread the printed word than he. Aldus knew that his market, and the market of all printers, lay not in the production of expensive, commissioned editions of the Bible or the Psalms, but in an inexpensive format that could easily be carried in a man’s saddlebag wherever he went. So Aldus made his books small, and cheap. The Aldine Editions, as his new format was called, were the world’s first pocket books, and they sold faster than he could produce them.

Aldine Editions were treasured by their owners, and thousands of them still exist in collections around the world. There are more than 500 in Brigham Young University’s Harold B. Lee Library, alone.

There’s a lot of speculation about the demise of traditional bookstores and the disappearance of printed books. I hope I don’t live to see that day, but a mail-order book-pusher that I used to patronize for several years seemed to feel the pinch. Their mailings shrank from being thick newsprint tabloids that I could hardly get through browsing before the next one came, to standard magazine-size catalogs, and then to skimpy 6×10 1/2-inch booklets.

I don’t get out much any more, except to visit the doctor, so after attending an appointment that involves two dozen injections into my back, while the anesthetic lingers it’s a treat to visit a brick-and-mortar chain bookstore in one of the shopping malls of our nearest big city. Thankfully, it still seems to be as well-stocked as ever, and to go inside and breathe deeply the aroma of soy ink is as good as catnip is to my Kitty. (Do bookstores have aerosol “new book smell” with which they spray the carpet after hours, the way that car dealers use cans of “new car smell”?) 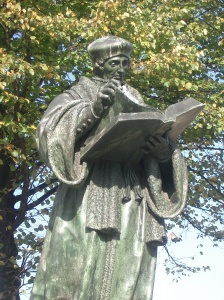 When I get a little money, I buy books; and if any is left, I buy food and clothes. – Erasmus

But frequently, I find myself leaving the store empty-handed: there don’t seem to be as many compellingly written books, anymore. I pick up a half-dozen volumes gleaned from the wide variety of genres that I read, and after leafing through them, I end up leaving them behind. The stories that are being shopped by today’s agents and purchased by traditional publishers rarely match my taste, and the quality of editing has deteriorated to a dismally off-putting low standard.

I’ve begun to do more buying from second-hand bookshops, both in person and online, looking for replacements for the books I inherited when my mother divested herself of her library, after she began to lose her sight, and which I have re-read until they’ve fallen to pieces. The second-hand dealers also supply me with my own copies of the few decent books I manage to unearth each year from my city’s public library, by virtue of a long-term, e-mail association with a local book club that I can no longer attend in person.

And despite my best intentions to materially support Indie Authors through my purchase of their Art, I’ve had to turn away from several listings at A Major Online Retailer, because they are offered only as e-books. I don’t own an e-reader, for reasons explored in Here’s Your Brain, on Books. In addition, the visual impairments I cope with make it exhausting to read from screens, no matter what adaptations I can make to the display, as detailed in Breaking Out of The Bubble.

I’ve found that I need to reserve most of my virtual-page-reading time for my own writing, or else I end up too tired to get any work done. I’ve already begun to send favorite blogs through a text-to-speech converter, to save on eyestrain.

Does anybody here recall that scene in the 1960 motion picture adaptation of The Time Machine, of the Time Traveller’s rage when he picked up a book from the Eloi library and it crumbled to dust in his hands? There was no mention of e-books, although the Eloi did have electronic archives that spoke, but the technology didn’t seem to have done them any good: the people’s intellect, energy and motivation had all withered away.

And despite all the nagging to “go paperless,” I fail to see how doing away with paper bills and paper books does anything beneficial for the environment, when, in order to access your e-banking, e-pay all your bills, and then read your e-book, you end up using enough electricity to run a refrigerator.** Trees are a renewable resource: after harvesting them for pulp, just plant new ones, and they’ll gladly keep sucking up all that carbon dioxide, over which the environmentalists are losing sleep. And plant an extra tree for me, in honor of the next mechanically printed book I buy, because when I “go,” they’ll have to pry a paper book from my cold, dead hands.

When I published Irish Firebrands, I formatted it first for hard copy by a POD. I had to reverse-engineer the formatting, to put it on Nook, and then on Smashwords. That was more of a pain in the drain than I like to deal with, but both projects went without a hitch, and yielded decently formatted e-books (it helps that I’ve been computing since before the parents of the latest generation of users were gleams in their daddies’ eyes).

Going in the other direction (from e-book to paper) would be faster and easier: just set up margins, gutter and paper dimensions for your desired trim size; paste the text into the resulting page template; format and embed fonts; hyphenate and fully justify; adjust widow and orphan control; add pagination and running heads to headers and/or footers; and if necessary, tweak line spacing and illustrations or other special effects. Add a spine and back cover to the cover file, send everything to a POD, enable an e-store page – and there’s another market cornered for your magnum opus.

A fellow Author who had recently published a title in e-book, upon learning of my disappointment that I wouldn’t be able to enjoy it in that format, graciously gifted me a copy of the manuscript, so that I could run it through my text-to-speech converter and make an audible copy. I don’t expect everyone to offer such generous disability accommodation, but I will make this appeal to other Indies: Please don’t say “Goodbye, Gutenberg!” and “Adios, Aldo!” Publish on paper, too. We Luddites will love you for it.

* We can also blame Aldus for commas, semicolons and italics.

** Running a desktop computer ($36/year) with a wireless modem/router ($10/year), uses more energy than a refrigerator does ($42/year). And while some try to make a case for laptops ($8/year), they’re not adding the electricity for a modem/router, nor are they figuring in the cost of running a fan pad ($ unknown/year) to cool the computer, which is necessary because laptops lack the space inside the case for an adequate heat sink and fan (it’s undissipated heat that makes laptops break down before desktops do, causing higher and more frequent repair and replacement costs). Finally, don’t forget the ISP to connect the modem/router the Internet, so that’s another cost layer. (Source of electricity consumption figures: http://www.forbes.com)