We’ve been trying to figure out how someone can manage to “pants” writing an almost 200,000-word, nearly 500-page novel, with no more background in creative writing than any other person who has a lifetime of avid fiction reading experience.

So far, our examination of Irish Firebrands has led us down the primrose paths of sensory descriptions, invasion by The Muses, reader psychology, learning the Irish language, the perils of proofreading, Authors as Artists, genre, the nature of Written Art, The 7 Reasonable Rules of Writing, and what it means to be an Indie … among many others.

When I was writing the book, the only analysis I did was of chapter length, in order to help with editing, and achieve reasonable reading times (approximately 25-30 minutes of silent reading or 30-40 minutes aloud, per chapter). This time, I decided to look for patterns in the structure of the story.

Whose story is it, anyhow?

Expanding on an analysis concept by Seumas Gallacher, I drew a table, starting with the important characters who appear in each chapter. Irish Firebrands tells the transformation stories of two main characters (Lana, Dillon) and two strong secondary characters (Frank, Medb). Occasionally the strong secondaries don’t appear in person, but their presence is manifested by minor secondaries who serve as their proxies (Frank’s sister, Paula, and Medb’s mother, Eilish).

The MCs are the only point-of-view characters. Is there a rhythm to their experiences? Taking the end of the chapter as a marker for the movement of the story, I listed the POV character of each final section. There was no obvious pattern that I could see to the distribution of POV, but oddly enough, chapter-end POV was almost equally apportioned between the two characters, with Lana ahead of Dillon by only one.

Then I divided up the odd-numbered and even-numbered chapters. Again, the totals were what seemed to be significant: they were close to being exact inverses, with Lana again ahead of Dillon by one.  The last thing I did with POV, was to count up the total number of chapter sections and see who was the POV character for each one. There turned out to be 165 section breaks, and looked at sideways, their distribution is reminiscent of Rough Seas at Shichiri Beach in Sagami Province. 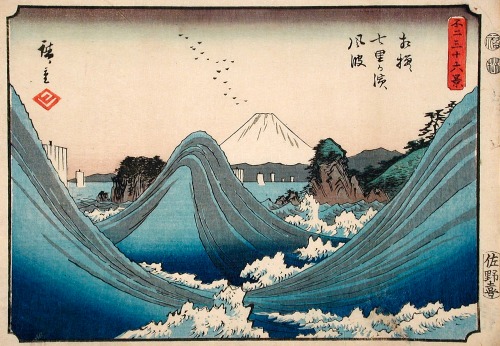 But looking at the totals was more like The Great Wave off Kanagawa: with a ratio of 60:40, there’s no doubt that Irish Firebrands is Lana’s story.

I looked for other signs of movement in Irish Firebrands. The story travels a lot: there are at least 92 visits to at least 21 distinct locations (some of which are on wheels). There’s usually more than one destination within the listed towns and cities. Readers get to see quite a bit of Ireland through Lana’s eyes, and some locales beyond the island, through Dillon’s.

There’s plenty of mental movement, too. Readers can pick up at least 41 hints that foreshadow developments for (or mysteries about) Dillon/Drumcarroll farm, Lana, and Frank, like the looming tsunami and the half-hidden rocks in Mt Fuji no. 2. (One reader reported shouting a warning: “No! Don’t touch it!”)

Finally, I took a look at emotional movement, as evidenced by the development of romantic relationships. There are at least 56 episodes distributed between the two relationships Lana carries on. Irish Firebrands is a character-driven novel with several themes and motifs, and because there’s no dominating “plot” to drive the story (i. e., no “save the …” or “solve the …” stuff), the development of “Happily Ever After” or “Happy For Now” with one of Lana’s lovers is the primary objective. This either lodges the tale in the Romance genre, or else, because the love interest and her heart throbs are unconventional in several ways, as a love story within Contemporary Women’s Fiction.

Remember, as an “organic” or “pantser” writer, I didn’t plan any of this. I’ve never attended a creative writing course. Now and then, a bit of “write what you know” pops up to the surface of a page, and bobs around until it gets pulled back out to sea by a riptide. I don’t read “genre” romance; in fact, the closest I’ve ever come to any sort of “genre” reading are Zane Grey’s westerns, Pearl S. Buck’s Chinese novels, and a mixed bag of “Catholic” fiction. So, I don’t know where Irish Firebrands came from: it just formed itself, chamber upon chamber, from the element-rich waters of the sea of books in which my brain has bathed, for more than 50 years.

What patterns do you see in your writing?

What rhythms do you feel in your stories?

32 responses to “I Can Hear the Ocean Roar.”