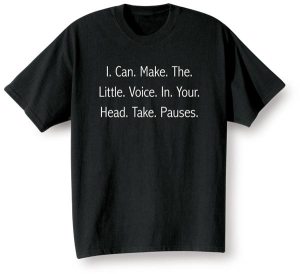 We’re all familiar with the Little Voice Inside One’s Head. We hear it when we read. We may use it to rehearse a response. Sometimes it gets hijacked by an earworm. If you’re a writer of fiction, your human and anthropomorphic creature characters will hear their own Little Voices, too.

Characters’ thoughts are called ruminations or internal dialogue. The printing convention is to use italics instead of quotation marks. Circumstances may make the expression of those thoughts be in the form of a monologue.

All writers are mind-readers, as far as their characters are concerned. Whether or not, and to what extent, the reader is invited to share that telepathic power, is affected by such variables as writing style, genre, point of view, and the presence of (and level of omniscience in) a narrator.

Some styles of writing may lend themselves more easily to the expression of the Little Voice, such as if it uses a conversational or a descriptive tone. The effect of genre is usually that of amount: a fast-paced, action-packed crime novella may have less room for it than may a full-length historical or love story.

We all wonder what’s going on inside other people’s heads, and reading novels satisfies the desire to know that. It’s usually a point-of-view character whose thoughts may become public, and in a third-person narrative, an anonymous narrator is often privy to those thoughts, and will share them, too.

But how much mind-reading is too much? In fiction, an excess of POV characters, especially in the same scene is called “wandering POV” or “head-hopping.” It’s confusing for readers to keep track of more than 5 to 7 points of view, and in a third-person narrative, two of them are already taken up by the narrator and by the reader, who can sympathize or empathize with one or more characters, but who still maintains a separate identity in the background of the reading experience. I limit my POV characters to two or three per book, and only one POV per section of a chapter (as designated by a white-space break).

How much thinking do the characters in Irish Firebrands do? It’s hard to say, but it’s a lot. In the first three chapters, I came up with 18, 11 and 23 thoughts, as evidenced by characters’ mental sentences printed in italics. If a rough average of 18 thoughts per chapter holds for the whole book, that yields something over 600 episodes of rumination. In addition to that are about 209 uses of the word “thought,” by the narrator.

That’s a lot of messing with minds.

Thanks to Rachel Carrera for her suggestion to write this post! 🙂