The Ten Rights of Medicalized Fiction (Part 3): The Right Damage 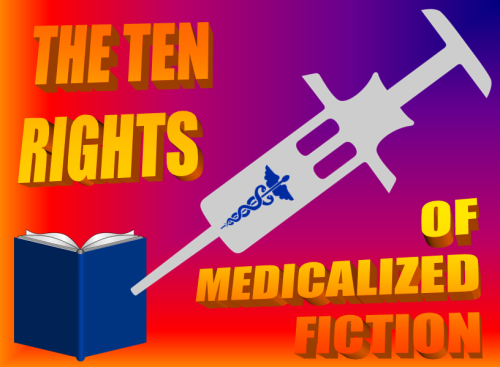 It’s far more likely that there are going to be major arteries and/or veins, internal organs and bones involved, with serious, if not fatal, consequences. Below is a movie scene which depicts a sword fight that approaches realism to me, a retired Registered Nurse:

Characters in fights must attempt to fend off pike thrusts, sword slashes and knife attacks, which leave them with numerous and severe peripheral injuries along with wounds that penetrate the viscera or amputate limbs. Blunt force trauma can cause death from internal bleeding. Explosions have concussive effects on the brain and vital organs, and hurl debris that can bruise, cripple or kill (most of the fatal wounds incurred during the First World War were due to the impact of shards from the detonation of regular artillery shells).

The above schematic drawings show only a few of the internal organs, bones, major blood vessels and nerves, but they are good reminders of just how crowded the human body is under the skin. When I watched Robin and Marian, and saw the frame that occurs at 2:56 in the clip above, I automatically thought, “Well, there goes a kidney.” (There should have been heavy bleeding, too, but that would have fouled up the movie’s rating.)

Stories in the “western” genre provide another example: The closeness of the ribs, and the act of breathing, make it impossible for a gunslinger to fire from a distance directly into the heart, without touching bone (being able to “drill a dime at [fill in a number] paces,” or having a nice, tight cluster on a target have no relevance).

As shown in the next illustration, there is much more hidden damage than may be revealed by entry and exit bullet wounds on a limb (the ever-popular “flesh” wound).

Not all bullets have the same effect on flesh and bones; the above illustration is based on the behavior of long, pointed bullets of the balle D or Spitzgeschoss (“spitzer”) variety. If you write a historical novel and include ballistic bloodshed, the period will dictate the projectiles your belligerents can fire at each other. Are your bullets spherical, like the balls of a blunderbuss, or are they conical, like a Minié? Is your long gun a smooth-bore muzzle-loader, or is its barrel rifled? Many variables (including weather) affect the trajectory, stability, speed, and force exerted by a bullet on impact.

You may need to include a few descriptive details about gunshot wounds. To begin with, there will be a bruise encircling the entry wound: if the wound is circular, the bullet entered perpendicularly; if it’s oval, the bullet entered at an angle. At close range, powder grains are driven into the skin, and will be visible. Shreds of cloth from the garment over the entry wound will be torn off and carried into the body by the bullet (over the following weeks, some of these foreign objects may migrate to the surface and be seen under the scar). The exit wound will be larger than the entry wound, and if the bullet has a reason to begin tumbling, such as its being deflected by bone (which will also be damaged by the impact), the hole can be much larger.

During the First World War, nobody knew that bullets tumbled, so both sides suspected their opposite number of using “dum-dum” bullets (rounds that had been tampered with by cutting off their points, improvising what’s called today “anti-personnel” ammo), when neither of them were doing so. For example, in a fatal head shot, upon impact with the skull, a rifle bullet would begin tumbling, and because there’s a small distance from one side of the head to the other, the round would exit at an obtuse angle or perpendicular to its path, presenting most or all of its length to the other side of the skull, and tearing off a much bigger piece of bone on its way out. Because it’s impossible to dodge a bullet, a head wound survivor would have been hit by a spent round or long-distance ricochet, because the projectile would have lost enough of its momentum to fail to enter the skull; however, the victim would still suffer considerable blood loss and one heck of a headache.

The thorax and abdomen (below) present a much larger target than do the limbs, so it’s more likely that in a gunfight, characters will sustain severe or fatal chest or abdominal wounds, rather than wounds to their extremities. The size of a thoracic or abdominal exit wound is a function of the length of the bullet’s path through the body, which may enable the round to complete its tumble before emerging base-first, and is no indication of the severity of the internal damage. Some of this damage is due to the phenomenon of the “temporary cavity,” which constitutes traumatic compression to the tissues surrounding the hole bored by a tumbling bullet. This compression zone later relaxes (or swells), but the internal bruising and bleeding within it is just as likely to be fatal as the tearing caused by the round as it ploughs through nerves, blood vessels and organs. If the bullet hits a rib or the spinal column, it will deflect and tumble at an angle to its original path, and the exit wound will be larger.

Fictional gunfights need not be limited to traditional firearms (remember a popular television character’s order to “Set phasers to ‘stun'” ?), but writers of science fiction and fantasy still need to brush up on anatomy and physiology, as well as to work out what principles of physics are involved with the weapons they invent, and the effects of those principles on their combatants’ bodies.

All of the details of such research need not show up in many words on the pages of novels, but research must happen in order for the consequences of physical conflict to be believable to readers.