A Character Name Database at Your Fingertips.

There are between 7,000 and 8,000 names in my genealogical database (not really very many), most of which are French, and some of which are on lines going back 14 generations (the French are prodigious genealogists). When I told the computer to extract all of my direct ancestors on the French side, it came up with 353 people.

I marked all the unique given names (most are forenames; a few are second names), and sorted them into the following table: 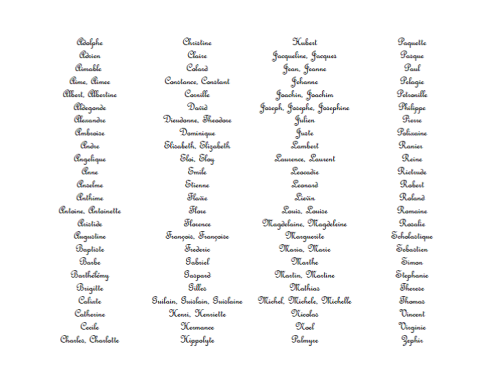 A partial list of my ancestors. (I was feeling decorative, so I embellished them by using French Script font).

On this list, there are more than 100 possible names for characters in a historical novel set in France any time between 1500 and 1930.

When I was writing Irish Firebrands, my sister asked me, “Why Ireland? Why don’t you write about France?” (Our family has no direct connection with Ireland; it was simply where the Muse had told me to go, but I did use a few forenames derived from my family for secondary characters.) My current works-in-progress include a prelude novel and a sequel to Irish Firebrands, but along with focusing on my French ancestry for this blog post, the Muse has slipped into the back of my head an idea for that French novel my sister suggested.

People in every culture have been recording their ancestry for many centuries. Asian clan books follow formats adapted to their languages, but most Western-culture genealogies are organized according to some variation of the Ahnentafel. 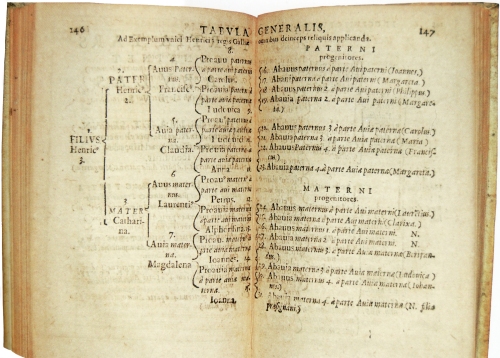 The first Ahnentafel, printed in 1590.

If you don’t have access to your own ancestral names, you can look elsewhere for character name inspiration. Persons who compile their genealogies often place copies of them in family history libraries; the largest is in Salt Lake City, Utah, and it has branches (called Family History Centers) around the world. The Allen County Public Library in Fort Wayne, Indiana, has the second largest genealogy collection and research facility, and smaller public libraries in that state also maintain “Indiana Rooms,” where local library patrons can deposit their published family records and conduct research. The US Social Security Administration maintains a database of names sorted according to their popularity by year or decade in the states and territories. “Baby name” lists abound on the internet.

Wherever you look for character names, just be sure that the ones you choose correspond with the time and location in which your novel is set. Anachronistic or culturally inappropriate character names can destroy a reader’s suspension of disbelief.

But if your own genealogy has been compiled, do consider taking a walk with your ancestors. Their names may to guide you to find the characters and story for your next novel.

Is there a family tree in your fiction’s future?

If you write relatively short or simple stand-alone novels, it may suffice to treat the family backgrounds of your characters with brevity; however, if you write epics or otherwise complicated works, such as family sagas or lengthy world-building series, you may need a scorecard to keep track of generations of players. That scorecard is genealogical documentation.

It’s not strictly necessary to append one or more genealogical charts to your novel, but enough well-known writers have done so to demonstrate the value of the practice to readers, who may otherwise find themselves floundering in a “who’s who” morass of characters related by blood or marriage (or both). Any tale that purports to be historical (whether depicting a fictional take on real human history, or the history of an imaginary world), if it has three or more generations of characters, can benefit from the inclusion of a genealogical reference tool.

Identification based on one’s forebears is usually a matter of law, because it governs the rules of inheritance (whether of wealth, title, or authority), accountability for purposes of taxation (very important for constructing and maintaining infrastructure), and especially the need to avoid the health risks of inbreeding in the population. Most cultures have codified such laws to their benefit (although the ingrained traditions of royal families have greatly complicated the matter for centuries), and it would be a very unusual imaginary world that would have no need of such regulations.

Take the problem of inbreeding. Small, geographically or culturally isolated societies can still be found, in which physical and mental disability are rife because of intermarriage between persons who share too many genes in common to safely produce healthy offspring. In cultures where this potentially severe problem is understood, incest laws regulate the degree of consanguinity between persons that will permit them to marry and reproduce with the lowest possible risk to their descendants’ health. These laws prohibit marriage and sexual relations between first-degree relatives (between parents and children, and between siblings), and certain kinds of cousins: if cousins share only one set of grandparents, marriage and reproduction may be permitted; if they share both sets of grandparents (such as the children of siblings from one family who formed couples with siblings of another family), they are not permitted, because although those children are genealogically cousins, they are genetically siblings.

How the crowned heads of Europe got away with marrying their cousins is based on this legal and biological technicality, generally following the concept “(ordinal number) cousin (cardinal number) times removed;” although in the case of Queen Victoria’s descendants, it still backfired badly, in the sex-chromosome-linked transmission of the disease hemophilia.

This chart shows how the cousin relationship is calculated: 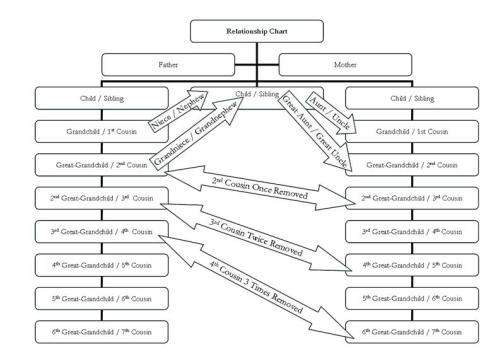 A blank version of the chart can help plot the relationship between any pair of persons, real or fictional. 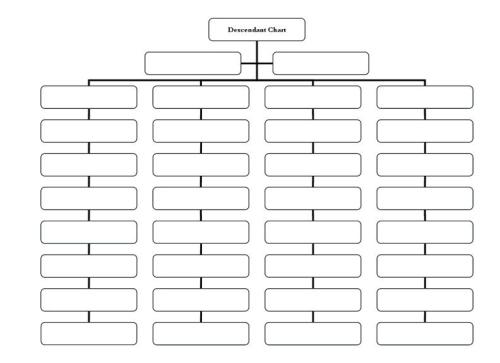 The first generation of descendants from a common (shared) ancestor are siblings; subsequent generations are cousins. To work out a relationship, put the common ancestor’s name in one of the blank boxes at the top of the chart, and plot the descending lines of direct ancestors down two adjacent columns, until you get to the names of the cousins in question. Connect the cousins by drawing lines between them: A horizontal line is drawn between cousins of the same generation (1st cousins, 2nd cousins, etc.); a slanted line drawn between two cousins shows how many “times removed” they are (meaning how many generations separate them from the same-generation-cousin relationship). The abbreviations usually employed by genealogists are “1C1R,” “1C2R,” “2C1R,” “2C2R,” etc.

Genealogical reference charts found in the appendices to novels are usually descendant charts, although you may find standard pedigree charts for individual characters.

Some enterprising authors may fashion diagrams combining the features of the two kinds of chart; such a diagram resembles a tree  with names forming the branches, trunk and roots. This tree of Celtic knots suggests how complicated some family relationships may become:

As with other forms of research that have a bearing on fictional character development, even if a protagonist’s ancestors have nothing directly to do with the story,  sketching a family tree for that character can help writers visualize the person, and the personality and motivation which influence that individual’s actions and ultimate fate.

I’ve posted about genealogy and family history (fictional and factual) elsewhere on this blog: All in a Day’s Work, ‘A Tree is a Bush that Made It’, and Bitten by the Genealogy Bug?