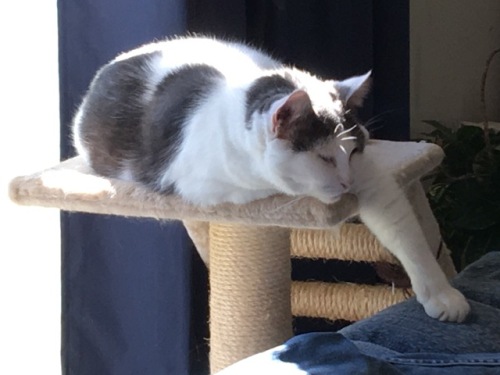 Oliver “Kittypoo” in his prime.

When I adopted him from the animal shelter fifteen years ago, they estimated his age to be about three, so he was approximately eighteen years old. His health had been steadily deteriorating since the first of this year, so my son and I knew what to expect, but it’s never easy when the inevitable finally happens.

He had a brief cameo role in my first novel, Irish Firebrands, as Dillon Carroll’s childhood pet.

Oliver was “Mr. Personality,” liked all humans, and enjoyed talking to people.

He took his responsibility as a companion seriously, and was loyal to his last breath, having chosen to be with me when he collapsed, and died within five minutes.

Because my son was out of town, my daughter came to help. She laid him to rest in the cozy kind of cardboard box in which he loved to play, with his crinkle sack for a cushion, and one of my son’s old T-shirts for a coverlet. His favorite crocheted toys, a bootlace, a handful of kibbles, and a kitty treat accompanied him as “grave goods.”

He rests now in my back garden, not far from my window.

Oliver “Kittypoo” set the bar at its highest, having lived as the perfect example of unconditional love. May we meet again, my most faithful friend!