Thank you! to my newest customer(s). I appreciate your support, and sincerely hope that you enjoy your purchases.

The performance of my expanded portfolio has been very encouraging over the past year. It took a long time (and a couple of serious illnesses) for me to discover what else I could offer my readership while my second and third novels are still in the works, but I hope the numbers shown in the chart below mean that I’m meeting the needs of book lovers all over the world. 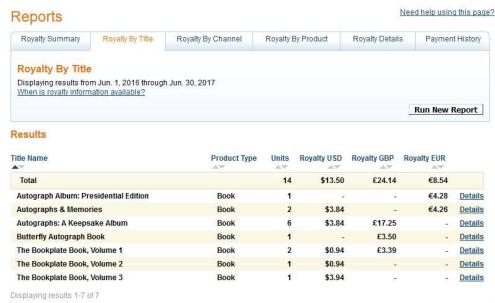 As you can see, in my characteristic disregard of the advice of writing gurus and publishing gatekeepers, I am not confining my creative works to the same genre I entered with my first book, the Literary/Romance/Fusion Fiction novel Irish Firebrands. Although it’s a very slow seller, my first novel has been complimented and reviewed fairly and positively despite its controversial subject matter. My next two novels, a prelude and a sequel, will be similar. But just because I can see such scenes and hear that kind of dialogue doesn’t mean I can’t indulge in following other avenues of creativity and enjoy producing other kinds of books.

Nor need you avoid diversifying your portfolios, my Indie Author friends. Whatever you feel like writing, just do your best when writing it. There will always be readers out there who will rejoice in discovering your range of talents and welcoming your work into their lives.

Aren’t You A Novelist?

Irish Firebrands is my first novel. It took almost three weeks shy of three years to write, and after about fifteen months of editing and beta-proofreadiing, I published it four years ago.

I have two more novels in the works: The Passions of Patriots (a historical prelude) and Once Burnt, Twice Blind (a sequel).

But if you’re a novelist, what’s up with all the non-fiction books you’ve been putting out?

I’ve been very ill for about two years, with diseases and treatments that have affected my ability to write fiction. But I still feel the urge to be creative, which is another way of saying, “That’s where the Muse has led me.” Because writing non-fiction is not as demanding as writing fiction (I was writing non-fiction for many years before I started writing novels), these different kinds of books have been a way to use my creativity as a form of occupational therapy – and get the Muse off my back!

But isn’t this blog supposed to be about your novel, and being a novelist?

Although my blog has predominantly featured posts analyzing the many facets of the creative writing process that brought Irish Firebrands into the world, a lot of my posts also discuss the calling of a Writer as an Artist, and the nature of being an Indie Author. Both of these roles are founded on self-determination, which means that we as Writer Artists and Indie Authors embrace our freedom to create the kind of Art that best communicates our messages, and that we exercise our rights to control its production and publication in the Art Marketplace. Therefore, I publish posts about my non-fiction in support of authors who decide to mix genres in their works, or to change genres altogether.

It’s taking a long time to regain my strength, and as the medications slowly take effect, I’m finally beginning to see snippets of fictional scenes and hear scraps of dialogue again, so I hope to return to creative writing sometime this year. But for right now, as my friend, fellow blogger, and Caledonian Bard Seumas Gallacher, author of thrillers, has said about his recent decision to launch into a long-contemplated Literary Fiction novel,”it’s ‘time’ to write ‘that OTHER book’…. “

Look online for other Indie Author posters with the hashtags
#IndiePrideDay or #IndieBooksBeSeen,
and then Like and Share what you see.

Authors: Add this logo to your own Indie Pride Day promo poster: