Piracy and plagiarism have always been with us: one of the earliest cases is said to have been adjudicated by the 6th-century Irish High King Diarmait mac Cearbhaill, who pronounced, “To every cow its calf, and to every book its copy.” This started a war that resulted in the exile of the culprit, who repented for causing so many deaths, turned over a new leaf, and became Saint Columba.

There are writers out there who are on the record dismissing the importance of book piracy, and likening it to “free publicity.” But why encourage criminals? Others have compared piracy to borrowing books from a public library. This opinion is mistaken. Libraries purchase their inventory from reputable sources, so authors have been paid for each book libraries acquire. Libraries then lend their own property to their registered patrons. This is fair use. Readers may later purchase books that they borrowed from a library. I have often done so.

Piracy undoubtedly is exacerbated by the reluctance of many Indie Authors to obtain copyright registration. What should thieves fear, when their victims will have difficulty proving ownership without legal documentation of copyright? In the USA, copyright registration is easy, inexpensive, and should not be omitted.

The distribution of free e-books also has made it simple and cost-effective for criminals to steal intellectual property. I believe that the pirates who advertise new paper books “in stock” are lying about their inventory. If they do get an order, they can easily download a cheap or free e-book and print from that copy. It’s not hard to reverse-engineer most digital documents, especially those which lack DRM.

A retailer giveaway may boost an author’s “sales ranking,” but such figures are deceptive: something that is given for free has not been sold. Assertions of popularity which are based on such misrepresentations destroy the credibility of all authors. Such promotionals benefit only retailers, who use them to make claims of having “best-selling” authors in their stables. Participating authors have reported disappointment when free-book promos neither improved nor maintained their incomes.

Irish Firebrands has moved its readers to amazement, reflection, anger, laughter, and tears, but it’s not a best-seller. It’s too bad that so few people have read it, but sometimes it helps to have published a sleeper, because I can account for every known legal copy:

My copyright was officially registered from the beginning of my book’s publication. I’ve seen my book’s cover on one of those dodgy “free e-book” distribution sites, but it’s accompanied by a copyright warning. If people are downloading or buying and reading pirate copies, nobody is reviewing the book anywhere (not even trolls).

I commend Indie Authors who register their copyrights. In addition, I encourage all to end free e-book distribution, and to set prices for their works that are commensurate with their value. Feel free to add the CAP IT! Badge to your blog’s sidebar or footer.

To show your support for
the right of Arts laborers to be paid for their work,
Visit and join this Facebook group: 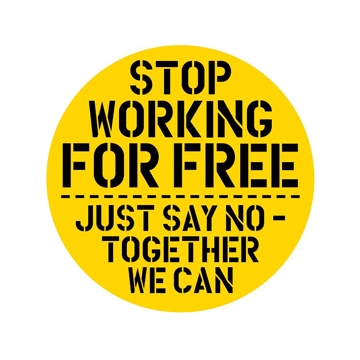