Haunting a Bookshelf Near You:

A different kind of ghost story.

I never expected to write a novel like Irish Firebrands, and I daresay you haven’t expected to read one like it, either.

Find out what makes the story so different, here:

Not Your Mother’s Mills & Boon.

Is It A Guy Thing?

Thank You,
for making the next spooky story you read be Irish Firebrands!

Lulu Press: A Better Option for Indie Authors and Their Readers.

Why did You Go Indie?

Why choose to be an Independent Author-Publisher?

Fledgling writers are urged to “write from your heart,” “write with your gut” and even “write what you know” (which is a much wider field of knowledge, skills, and abilities than the phrase is often interpreted to mean). Unfortunately, what a writer feels strongly about or knows comprehensively is not necessarily going to be a popular topic in the world of traditional publishing. Such manuscripts may be considered by nature unmarketable, in the opinions of publishing gatekeepers. Here are two examples:

The issue of faith has been secularized in modern fiction, to mean faith in a cause, another person, or oneself. In general, it’s unusual to find modern popular fiction which includes faith as the active practice of religious beliefs, even as a minor aspect of character development. When a positive depiction of religious faith does appear in print, I’ve observed that it’s highly likely to be something of Middle-Eastern or Asian origin, perhaps because novels set in those geographic areas are now popular.

The exercise of any variety of Judaeo-Christian faith by fictional characters seems to be tolerable to modern mainstream publishers only if the story subjects that behavior to ridicule or criticism. Novels containing positive depictions of this variety of religious faith must therefore resort to being pigeonholed into the publishing niche of a particular creed.

Unfortunately, most Western European religion-oriented publishers (many of whom fall into the “small press” category) are very picky about what goes into their catalogs: Any story which could be even remotely construed to show their religion or particular denomination in a less-than-perfect light will be shunned, even if the plot is ultimately faith-promoting.

This censorship does a disservice to the vast number of readers with Western European backgrounds for whom religious belief makes up a natural part of life. These people want (and need) to read stories about persons of their faith who are not perfect, but who are still struggling to improve themselves.

The keywords I used to find artwork for my “For the Love of Books” blog series were only “books in art” and “reading in art,” but I find it interesting that many of the artistic renderings of readers that came up are of persons who are apparently reading Scripture (most often the Bible, with one example of the Koran and another of what must be a Torah and/or Talmud study group). Literacy was once highly prized because it conferred upon the individual access to faith-inspired writings. Gutenberg made history by mechanically publishing the Bible.

If a general-prohibition of Judaeo-Christian oriented fiction by mainstream publishing had always been in place, where would that have left the works of such literary greats as Lloyd C. Douglas, Lew Wallace, Rumer Godden, Graham Greene, and Pearl S. Buck (to name only a few)?

Openly identified psychological disorders also may fall into the “trigger taboo” category of untouchable fiction. Mental illness frightens as many people now as it did back when the only treatment option was institutionalization. Traditional agents and publishers are even more gun-shy than most, perhaps because they believe their next Maserati payment may depend on the success of a representation or publishing decision.

Mainstream publishers do seem to enjoy putting out reams of sensationalist fiction full of graphic descriptions of aberrant behavior which is undeniably caused by violent forms of psychopathology, especially if the connection to mental illness is rarely, if ever, mentioned. A book like Dennis Lehane’s Shutter Island can achieve acceptance and even acclaim because it masquerades as a common mystery/thriller and conceals the protagonist’s psychological disorder until the end.

Novels which are more forthright about the existence of mental health issues among their characters, probably scare off most agents and publishers. The resulting dearth of plausible fictional characters with accurately depicted cognitive and/or emotional disorders does a disservice to the legions of real sufferers (the vast majority of whom are not and never will be violent or dangerous psychopaths), as well as the blessedly “normal” folks who don’t understand the life challenges that are faced by the mentally ill.

The traditional publishing phobia of garden-variety psychopathology needs its own cognitive-behavioral therapy.

A bleak bottom line in the fog – or a cloud’s silver lining in the sunset?

New novelists who have written with the passion of heart or gut have the conviction that there are readers “out there” who will enjoy and benefit from their fiction, so these writers are justifiably eager to get their message of hope out in public. Unfortunately, wading through mounds of rejection slips while waiting for some traditional agent or publisher to recognize the worth of their work is not going to accomplish that goal.

My having written a novel about characters with both Western European religious beliefs and mental illnesses was among the reasons why I didn’t seriously consider going the traditional submission route with Irish Firebrands – along with my having a fiercely independent nature that refuses to “submit” to anyone, as far as my Art is concerned! 🙂

Our works of Written Art may incur censure instead of becoming cynosures, but by our taking the plunge into Indie Authorhood and publishing our taboo tomes ourselves, we’ve taken the proactive step of making it possible for someone who suffers tests of mental and emotional health or trials of faith to have the chance to find inspiration in the tales we tell.

The Second Printing (paperback) has been divided into two volumes: easier to hold, smaller to pack, lighter to carry! 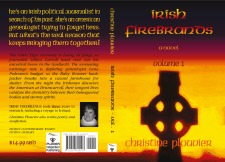 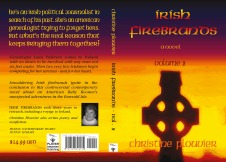 The Third Printing (deluxe hardcover with dust jacket) features a bonus central illustration section that includes floor plan sketches, drawn while the novel was being written to help block out scenes (a holdover from my ancient university days on the stage).

Both printings will be sold by Lulu Press, as well as Ingram distribution, and the Barnes & Noble and Amazon online retail outlets.

🙂
Discounts will be available on books purchased from Lulu.
🙂

Note: For a limited time, the single-volume paperback First Printing will continue to be available from Amazon. The plan is to replace it with a US English edition and different cover art. (It’s possible for a book’s First Printing with the original cover art to accrue value in the resale market, especially among specialty collectors, such as aficionados of Irish fiction.) At present, Smashwords original ebook distribution remains unaffected.

(Covers digitally reproduced here may vary in color from actual printed copies. The original text of Irish Firebrands is written in Commonwealth English. These printings vary from the original only in that minor text errors were corrected. The interior illustrations, new cover art and different bindings are incidental changes that do not affect the existing registered copyright. Irish Firebrands © 2012 Christine Plouvier. All Rights Reserved. )